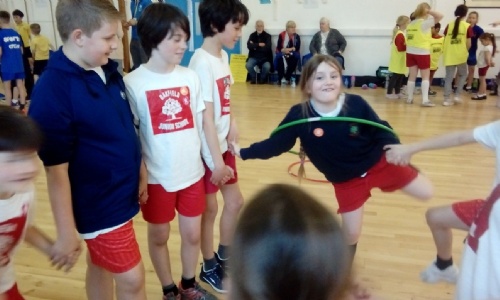 Finnnan has written a report of their morning:

When we went to the Physifun Sports Festival we first played a game called Temple Run many people may think this is a video but it isn’t the aim of the game was to get as many bean bags as possible from the middle without being hit by a ball.

After that, we went around eight different activities we were being scored on these. One of the games was where you had to get all three different coloured beam bags and shout BINGO the first to shout BINGO is the winner. However, there were taggers if you were caught by a tagger you had to start again!

Throughout the games we had to show the values if we showed one we would get that values sticker the values were: honesty, respect, determination, self-belief, team work and passion.

“I found it very fun. My favourite game was head shoulders knees and cones. I enjoyed showing the values and collecting stickers.”

“I had lots of fun. My favourite game was temple run. I collected the stickers: passion, determination and self-belief.”

Reuben 3K:
“I had a really great time at the festival. There were lots of sports to play.”

Olivia 3K:
“I liked the games and my favourite one was Hoop Scoot Tag where we had to get coloured bean bags in hoops.”

“I liked the game where you had to get bean bags without being touched by the ball.”